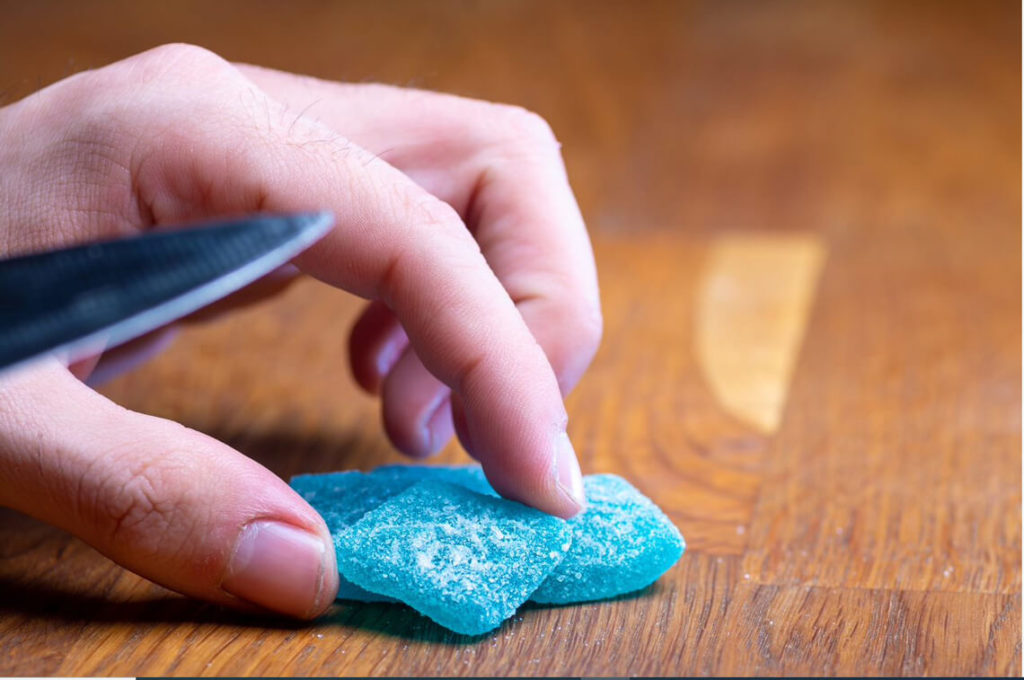 Am I Supposed To Do That?

Yes! Dosing edibles is a skill that every user of cannabis products should try to develop. It’s important to know your own level of tolerance whenever you plan to indulge in psychoactive treats. I typically hate saying this as far as marijuana, but in this case, it’s OK to think of it like alcohol. You wouldn’t down a tray of shots without knowing your limit (or maybe you would, but you probably shouldn’t), so why would you down a whole bar’s worth of edibles before you know how many it’ll take to knock you on your ass?

Just like with drinking, there’s a point at which it’s possible to get ‘too high’. Compared to smoking weed, ingesting edibles is an extremely easy way to reach that point. Typically, by the time you’ve smoked enough flower to approach the realm of ‘too damn high,’ your lungs will keep you from ingesting more. The ever-present stoner’s cough is actually one of the reasons it’s hard to get too high from smoking, once your tolerance is high enough.

No one wants that, either. Most people have a story or two about getting too high, and while a few of them make for a funny retelling years later, lots of people end up scared or paranoid and swear off weed forever. I think that would happen less often if people were aware of dosing practices, which is easier than ever thanks to marijuana edibles becoming legal. The process of legalization required new laws to be passed that concerned product packaging, as well as regulations on the claims of THC content and other quantifiable measures of potency.

Prior to legalization, the most you might get was an estimate of how much weed was used to cook whatever edible you were enjoying. Even that was usually exaggerated by your dealer, though, so it was difficult to be sure what you’d get. As a result of this, most of the times that I saw people get way too high growing up were the times they tried edibles.

So What Can We Do About That?

We can learn how to dose!

The classic advice for this stuff still applies here: “Start low, and go slow.” It’s boring, but it works. If you’ve never had an edible before, it’s probably best to avoid the 50mg gummies for a while. In Canada, the legal market caps their edibles at 10mg THC, which they consider to be a safe level for most adult users. That’s not a bad place to start, if you’ve smoked cannabis before.

If you’ve never smoked before, you might have to start smaller. Microdosing has been gaining popularity for quite a while in the world of edibles, and that extends beyond the realm of cannabis. Microdosing psychedelics is beginning to take off, as well, as it has beneficial effects for a number of chronic conditions. Microdosing typically provides different effects than a full dose of a psychoactive chemical would, but those effects can still be quite intense for those who’ve never experienced them in the past. A microdose is typically between 1-2.5mg, so newer users should start there.

Many modern edibles will also list their CBD content, most often as a ratio against their own THC content. A 1:1 edible would have the same level of CBD and THC, while a 10:1 would have 10 times more CBD. CBD comes with its own set of effects, so don’t rush into combination edibles without doing your research! The experience they can provide will be different from an edible that only contains THC.

Here are a few for aspiring edible users:

(1) Don’t keep eating just because you don’t feel high. Edibles can take a little time to kick in, and the delay is more dependent on your body than the edible itself. Some people can digest the active chemicals much faster, while others take more time. Just because your friends begin to feel effects before you doesn’t mean that you’re not far behind. Resist the urge to ante up until at least an hour passes, maybe two.

(3) Eat normal food before or with your edibles. Not everyone’s with me on that, but no one likes gut rot. Some users claim that eating edibles while on an empty stomach gets you higher, but there’s little evidence supporting that. On the other hand, I’d say that almost everyone who smokes should be familiar with the munchies, which are almost guaranteed if you don’t eat before the high starts kicking in. If you’ve got a sensitive stomach, I would highly recommend chowing down on some actual food.

(4) Beware of super potent edibles! Grey market vendors have access to edibles derived from shatter and other extracts, which will be WAY stronger than your average edible. They’re great for veteran users, but beware of those as introductions to the world of edibles. Most users will find their effects to be too strong, so be sure to read the package when you buy new edibles.

Credit where credit is due, 3Leaf Edibles has an insanely good graphic for this. That’s not even a plug, we don’t carry their products, they just did an awesome job. I’m honestly impressed.

To end this with a final tip, though, I would say to listen to your body. You probably won’t find the perfect dose you need the first time, but you will if you keep trying! Start low, go slow, and you shouldn’t find yourself in the uncomfortable situation of being too high. If you do, however, you can always ask a friend for help. You can even rope some people in to supervise you, if you’re anxious! Nobody should have to be embarrassed to ask for assistance, as every stoner had to try an edible at some point.

We’ve got lots of potent edibles for sale ourselves, so why not try a few next time you order?